The findings from an investigation into a serious crane and working at height incident at the Kvaerner offshore yard in Verdal, Norway last month has been published.

The main findings from the internal investigation of the February 8th incident has been now presented to the Police and the Norwegian Labour Inspection Authority.

We have only recently heard about this particular incident, which occurred when a crawler crane, rigged with 51.8 metre boom and 30.4 metre fly jib, lifted three men in a man basket up to inspect a newly fabricated offshore wind turbine jacket. 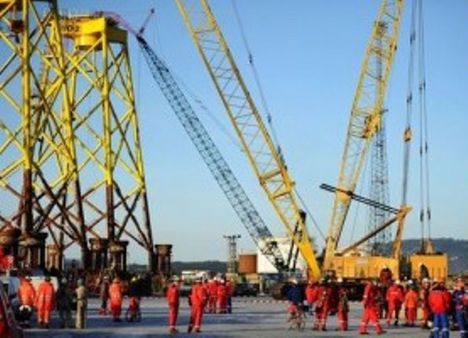 It had been 32 metres above ground when it started to go, the first jib impact cased it to suddenly drop nine metres, the second impact a further eight metres and then the final 15 metres to the ground- or rather barge deck, as the jacket was sitting one a large barge. 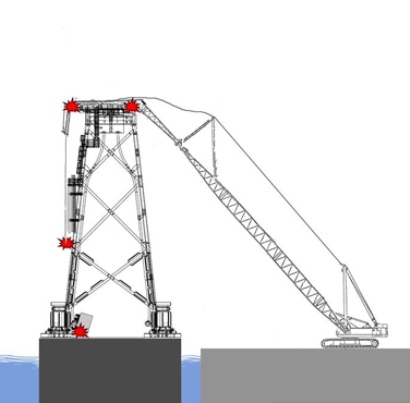 All three occupants were severely injured and remain in serious condition although they are all recovering.

Kvaerner chief executive Jan Arve Haugan said: ”An accident like this is unacceptable and should not happen in Kvaerner. We have taken this very seriously and our own investigation team has identified the main causes and defined a number of recommendations in order for us to further improve our health and safety performance. These recommendations will be put into action immediately so that we can strengthen our clear safety rules in order to prevent such accidents from happening”.

The recommendations coming out of the investigation concern improvements in the organisation of work at the yard, reinforced safety barriers during work at height and implementation of additional task specific risk assessments for operations utilising personnel in baskets and more specific measures, which we have not yet seen.

First of all it is good to see how quickly this investigation was conducted and concluded. Sadly we have yet to see the full report and it has not been circulated as widely and as openly at it should.

However it does make a number of positive recommendations regarding the use if man baskets. But it appears to overlook the fact that an alternative, safe method exists in the form of a boom lift, possibly modified for the task.

Hopefully Kvaerner will circulate this valuable information more openly and perhaps look at limiting the use of man baskets to jobs where it is truly the only option.