A large boom truck crane overturned in Bethesda, Maryland on Saturday while removing a tree from the back yard of a house.

The operator was trapped in the cab of the crane and was taken to hospital with a broken leg. The crane was rented to remove a large oak tree that was damaged in storms a week earlier.

Initial reports suggest that the operator was trying to lift a section of the tree that was heavier than he expected. A co-worker was in the tree at the time of the time of the overturn, but was unhurt. 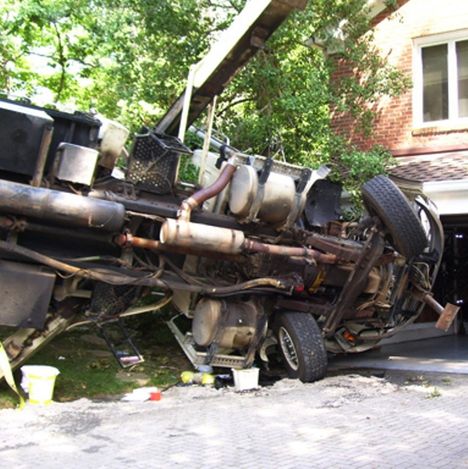 The homes on either side of the crane’s boom were virtually undamaged. A couple of large recovery trucks were called in to pull the boom truck back onto its wheels and remove it.

Removing trees from the backyard of a home… how many times do operators underestimate the weight?

Trees, along with hot tubs should sounds alarm bells with any crane rental hire desk/dispatcher. The money is usually poor while the risk of an overturn seems higher than for other types of lift.

The attraction is probably the idea of a quick lift – easy money – however a large number of companies have found that such lifts deserve more respect but only after the damage has been done.