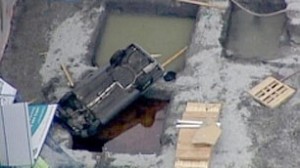 On September 2nd, 2010, a two-car accident occurred at Main Street and East 30th in Vancouver B.C which caused a sedan to accidently crash through the safety fence and fall four storey’s into a large excavation at a major construction site.

Trafalgar Enterprises, the Vancouver based real estate development company, had crews working on the site just hours before the accident took place. Thankfully, there were no workers on the site when the car went flying through the safety fence and fell into the excavation. Amazingly, both drivers survived the accident with only minor injuries.

Leo Pascuzzi, Site Superintendant for Trafalgar Enterprises commented that although the insurance company wanted to delay removing the car, he knew that he could depend on Eagle West Cranes to provide the services he needed to safely and efficiently remove the car from the site. The day after the accident, Eagle West brought in cement barriers to secure the construction site and a remotely operated, 60 ton folding boom crane to raise the car safely out of the large excavation. “Eagle West really stepped up to the plate. I called the morning after the accident and needed a crane to pull out that car A.S.A.P. When I called, they knew exactly what to do, and did everything I asked – they didn’t have to but they did and they did it fast! The service I needed was done the same day I called”.