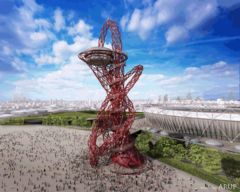 A spiralling, 115 m-high sculpture by Turner Prize-winning artist Anish Kapoor has been chosen as a spectacular new visitor attraction to mark the London 2012 Olympic Games. The tower, named the ArcelorMittal Orbit, will be situated in the Olympic Park and will be 22 m higher than New York’s Statue of Liberty.