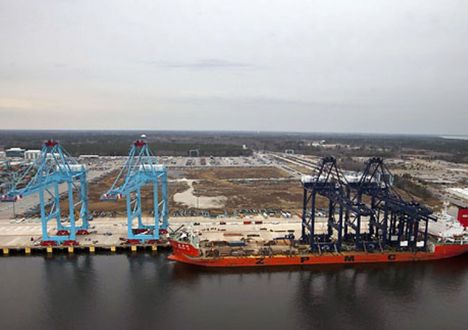 A Chinese crane delivery ship has been ‘arrested’ by the U.S. Marshals Service after it damaged a quayside crane in Portsmouth Virginia.

The arrest follows an accident on February 14, the crane delivery ship Zhen Hua 24 had just delivered two new cranes to the port and was pulling away from the berth when one of two cranes still on-board the ship, for delivery elsewhere, clipped the jib of one of the new 1,650 ton crane it had just unloaded, knocking it off of its rails and twisting part of the structure.

The Virginia Port Authority and Virginia International Terminals then sued the ship itself – the Zhen Hua 24, as well as its owner – ZPMC – Shanghai Zhenhua Port Machinery for $14.65 million in damages. An arrest warrant was then issued for the ship before it left the port and it is now in federal custody.

The port claims that its damaged crane cannot be used and is blocking the dock, preventing other cargo operations from taking place on the berth.

The suit claims that the damaged crane will need to be dismantled and removed in order for normal operations to resume, and that might take a year or so. Based on this it is claiming $1.2 million a month – $14.65 million in total.

ZPMC says that the crane can be repaired and indeed work is already underway- employing several boom lifts and mobile cranes. The ship has a 20 man crew aboard, along with two container cranes and two rubber tyred gantry cranes all bound for Columbia.