The Cotter Dam project is losing time and money after work safety authorities shut down the site’s main tower crane. 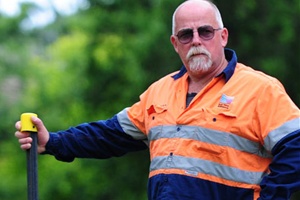 And the man who blew the whistle on safety concerns at the site says construction bosses are making an example of him to stop other workers from speaking out.

But ACTEW Corporation says work on the site is proceeding without the crane and that no worker is being targeted for raising concerns.

Work Safety Commissioner Mark McCabe told The Canberra Times yesterday his inspectors had shut down the crane on Wednesday and that it would remain off-limits until ACTEW’s contractors proved it was safe.

Mr McCabe said the consortium of firms building the dam, the Bulk Water Alliance, had ignored the advice of their own engineers, who recommended seeking an independent expert’s advice on the safety of Tower Crane No1.

”A prohibition notice is in place in relation to Tower Crane No1, that’s the big one, and we have asked for documentation to satisfy us that it’s OK to go back into use and we haven’t sighted that yet,” Mr McCabe said.  ”What we’ve asked for is an independent assessment … as per the Australian standards.”

Mr McCabe said his inspectors had also raised other concerns about a smaller crane, about formwork and scaffolding, but their concerns had been addressed. But he was worried problems were emerging repeatedly at the dam.

Crane driver Steve Kenniwell, the man who first raised safety worries about the crane, said yesterday he had been stood down on full pay, with his supervisors alleging he took part in unauthorised industrial action.  But Mr Kenniwell said he believed he had been stood down for speaking out on safety.  ”I’ve been raising issues with potential cracks to the structure of the crane for about three months.” he said.

”My concern was they’re knowingly putting workers on that site at risk.  ”I think that what they’re trying to do is take me out to put the fear of God into the other workers out there. So yeah, I’m definitely worried about my job.”  But an ACTEW spokesman denied the crane driver was being targeted for voicing his safety concerns.

”No one at the site has, or would, be accused of misconduct for reporting safety concerns to site management or outside authorities,” the spokesman said.  ”All workers at the Enlarged Cotter Dam worksite are encouraged to report potential safety issues, as safety is the key concern at the worksite.”  The spokesman said work was continuing using the site’s two other tower cranes.