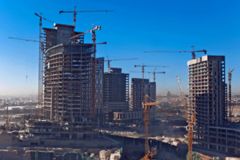 The timeline for construction on the financial district is very tight, so the main contractors are using as many cranes as possible, said Manitowoc. Pictured above are some of the 90 tower cranes working on the financial district, each skyscraper has up to six cranes, and the smaller buildings have three to four cranes. The cranes are working 20 hours a day, six days a week, to ensure the ambitious three-and-a-half year project stays on schedule.

NFT has a team of engineers working at the site, supported by local Manitowoc Crane Care, to ensure deadlines are kept and the machines stay operational.

“After working on Princess Nora and other recent jobs, we were delighted to have our cranes working on the King Abdullah Financial District,” said Nabil Al Zahlawi, managing partner at NFT. “High-profile jobs come with lots of pressure, but our reputation and experience help customers meet their deadlines. Potain cranes have precise control and excellent productivity, so they get more done even when several are positioned close together.”

Work began in November 2008 and will finish at the end of 2011. The cranes arrived in stages and the first 20 arrived in February 2009. The second and third installments, each of 35 cranes, followed in late 2009 and then June 2010. Saudi Binladin Group purchased the majority of these cranes.

The cranes are lifting steel, wood, concrete blocks, shuttering and other materials. Most loads weigh between 2 and 3 tonnes, although the largest weigh up to 6 tonnes.

The financial district will host a large financial community, including the headquarters of the Capital Market Authority and the Tadawul Stock Exchange. It will also house numerous regional offices for banks and financial authorities and will create an estimated 50,000 jobs.