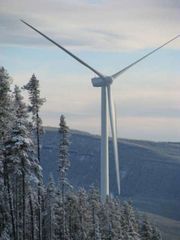 Eagle West Cranes and its subsidiary Stampede Crane & Rigging have been awarded the crane services contract for the Bear Mountain Wind Farm near Dawson Creek, British Columbia in Canada. The wind farm will operate 34wind turbines, each with a hub height of 80 meters (262 feet) and a total standing of 383,900 kgs (844,580 pounds). The project is slated to start in June 2009 with completion due by 30 September.

Demolition the Nooderlaan bridge in Antwerp