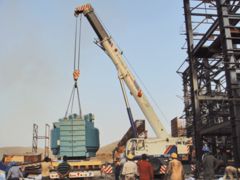 Manufacturers from outside India are making forays into a market traditionally dominated by a particular type of pick and carry crane. Times are changing and opportunity is rife.

Although it will be some time before the pick and carry crane is eclipsed as the most common type in India, the market is moving slowly towards models found in foreign markets. There is an increasing requirement for a broader range of higher lifting capacity, quality products, with long life expectancy and comprehensive after sales service.

According to Off Highway Research (OHR), there were 6,499 mobile cranes sold in India during 2009, a majority of which will have been the pick and carry type, produced by domestic manufacturers including Escorts and ACE. This is forecast to increase to 8,000 units by the end of 2010 and 11,500 units during 2014, says OHR. These numbers represent significant growth when compared to OHR’s 2005 sales figure of just over 4,000 units.