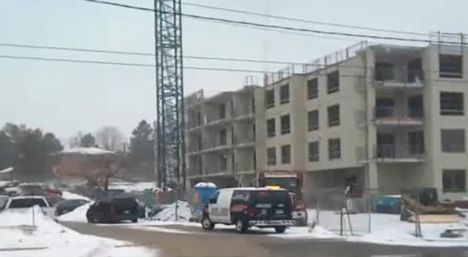 A man has died after a crane dropped a concrete panel on him in Kitchener, Ontario, just west of Toronto, Canada yesterday, it was the second incident on the site in two weeks. The man aged 42 suffered severe head injuries when the concrete slab fell as it was being lifted off of a truck by a tower crane. The ministry of labour suggested that poor rigging may have been to blame. The company responsible for the site is Tricar Developments.

The site, an apartment block construction called Belmont Village Condominiums, reported another accident just over two weeks ago, when a 41 year-old man was knocked unconscious after being hit by a swinging load, he did not suffer any serious injuries though.

In addition the ministry of labour says that it received complaints on March 2nd over the way the crane was being operated. Specifically the call said that the crane was routinely lifting loads over the heads of workers on the ground. The complaint was investigated but documentation and procedures were apparently in place and no further action was deemed necessary.

It is hard to know quite what to say, clearly there was an issue on this site and it looks like it is third time unlucky for the 42 year old man who is lying in a morgue tonight.

One man knocked out and then a serious complaint, it seems that alarm bells should have sounded louder. This sums up the typical situation where the focus is on paperwork and documentation rather than what is really happening on site.

Most sad of all is that the other men on this site did not shout a little louder, if this case is truly as bad as it sounds there will be a number of people on that site today that are very much wishing they had.