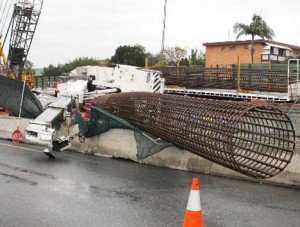 A crane tipped over this morning on a road improvement project in Brisbane, Queensland, Australia. The crane, a Franna pick & carry model was unloading or moving a reinforcing bar cage for a pile when it tipped. The boom crashed down onto the perimeter fence of the site, with the boom and formwork protruding into the road.  No one was injured in the incident, but Workplace Health & Safety is investigating.  The project is the city’s Northern Busway route at Lutwyche Road, the accident which occurred around 9:00 caused considerable traffic delays as two of the roads lanes were closed while the crane was recovered.