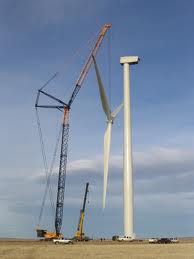 We have been trying to ascertain the facts of a large crawler crane accident in the UK for a week now and still know little more than the basic facts.  We received several reports that a 300 tonne Liebherr LR1300, owned by Weldex, had tipped over on a wind farm project in South Wales on Thursday last week, while our editorial team was in Bologna for SAIE.  Early information said that the crane had tipped over after the road it was travelling on had given way under the tracks.  In the time since the accident all we have been able to discover is that

a) the accident definitely occurred, b) that it was travelling between turbine sites and c) that no one was seriously injured.

We also know that the HSE has been on site, investigating what happened.

We are still waiting for a statement from Weldex who have spoken to us but not yet divulged any details.  We have also discovered that a similar accident occurred with a Terex crawler crane last year in Scandinavia. The crane, reportedly a Terex CC2800NT narrow tracked crawler tipped over when the road underneath it gave way in a similar manner to the most recent case.