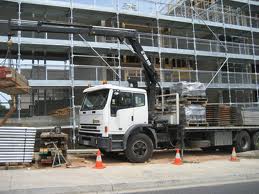 A BURY firm has been fined £40,000 after a horrific crane accident left a man severely injured. David Collins is now a paraplegic after suffering serious injuries to his head, back and legs when metal tubes weighing as much as a transit van fell on top of him.

The 31-year-old father-of-two was working as a lorry driver and crane operator for Spectra Scaffolding, based at the Warth Road industrial estate, off Radcliffe Road. at the time of the accident.

At Stoke-on-Trent Crown Court on Monday, Judge Robert Trevor-Jones fined the firm £40,000 and ordered them to pay £45,000 prosecution costs.

The court heard how, on November 7, 2008, Mr Collins was unloading 21ft-long scaffolding tubes from the back of a truck using a mobile crane at the Argos outlet in Hanley, Staffordshire.

One of the lifting slings detached from the crane hook, causing the metal tubes, weighing nearly one-and-a-half tonnes, to fall onto him.

Mr Collins, from Gorton, was taken to hospital and remains paralysed more than three years on.

The Health and Safety Executive (HSE) investigated and Spectra was charged with failing to plan the work adequately and failing to train or supervise Mr Collins properly.

On behalf of the firm, the directors pleaded guilty to both charges.

After the hearing, HSE inspector Lindsay Hope said: “As a result of this incident Mr Collins has been severely disabled and could easily have been killed.

“Companies that operate lorry-mounted cranes must ensure their operators undertake appropriate, recognised training in all aspects.

“In this instance, the lift wasn’t properly planned or supervised and Mr Collins hadn’t been sufficiently trained in how to use the crane and slings properly.

“Furthermore, the equipment had not been properly maintained and should never have been used.”

Mr Collins declined to comment on the court case.