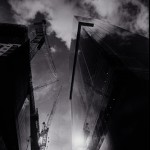 Police in Kansas City, Mo., say one worker has died following a crane accident at the construction site of a performing arts center.

Police say a second worker was injured in the accident around 1:40 p.m. Tuesday outside the Kauffman Center for the Performing Arts near downtown.

Police spokesman Darin Snapp says the two men were in the crane’s bucket when it tipped over. He says one of the men was pronounced dead at a hospital and the other was conscious and talking.

Construction on the 13-acre site began in 2006 and is scheduled to be finished in 2011. The $400 million center will be the home of the Kansas City Symphony, the Lyric Opera of Kansas City and the Kansas City Ballet.