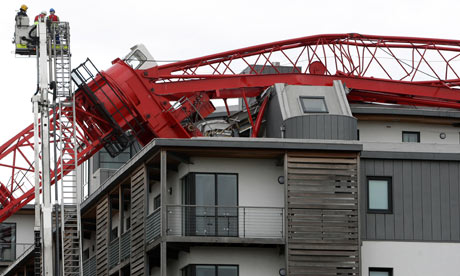 Liverpool, England A luffing (assumed to be a Wolffkran from the design) tower crane has collapsed backwards into a apartment building adjacent to the jobsite. The operator was thrown from the cab onto the building and is in stable condition. No one in the apartment or jobsite is reported to be injured other than the operator.

Possible reasons for this collapse are numerous off of the one picture. No limits on the boom allowing the boom to be taken past 86 degrees or so can cause this. Poor soil conditions giving way under a base can cause this. Structural failure in the tower would be obvious given more pictures. Shock loading due to poor rigging or load line failure also can cause loss of rear overturning moment.

The crane is an obvious loss. The project will be at a stand still. The apartment next door may have to be evacuated long term. We can’t say what the cause is from the one photo, but preventing it looks awfully cheap now.