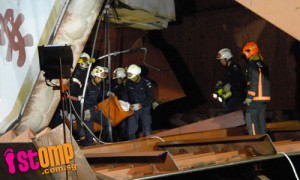 A Chinese national in his 20s was killed in a worksite accident at Pandan Road yesterday (Dec 15) evening. The worker was pinned under a toppled 60-tonne crane for more than 2 hours. The casualty was pronounced dead on site at 2050hrs by SCDF paramedics. Three other workers with varying degrees of injury were taken to NUH.