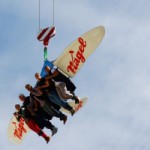 European tower crane manufacturers have produced new guidance to emphasise that their machines are not designed to be used as fairground rides.

The position paper from the Fédération Européenne de la Manutention (FEM) makes clear that tower cranes are designed and manufactured to lift loads, not people, and that they should not be used for entertainment purposes.

At the same time, it has been confirmed that such rides will not be permitted at the forthcoming Conexpo-Con/Agg trade show in Las Vegas, following lobbying by the International Powered Access Federation (IPAF). IPAF represents manufactures and users of powered access platforms, which are designed to lift people. It expressed concern when a tower crane was used at last year’s Bauma trade fair in Munich to give visitors a ride over the show ground (pictured).

The new document from FEM Product Group for Cranes and Lifting Equipment, Sub-Group for Tower and Harbour Cranes, states that: “Tower cranes are, in general, designed and manufactured to lift loads as the intended use. All other uses are not allowed by manufacturers. When a user of a tower crane decides to operate a tower crane not in line with the intended use as described by the manufacturer, the user is responsible for a risk assessment according to the national work place safety regulations and he does so under his own responsibility.”

The FEM position paper further states that: “For professional use, national labour regulations may allow tower cranes to be used to hoist and suspend personnel in man baskets only in unique work situations when it is the least hazardous way to do the job… For any other use not described in the instruction handbook (for example, entertainment purposes), national regulations of the member states must be followed.”

The FEM tower crane position paper echoes an earlier position paper on mobile cranes in May 2011, which states that: “Mobile cranes shall never be used for entertainment purposes, e.g. lifting of persons for shows, bungee jumping, dinner-in-the-sky or lifting of other structures with people on the structure or underneath.”

However, a year later it reversed that stance to say that mobile cranes could be used for rides and entertainments so long as a risk assessment was carried out.

The new tower crane position paper was drafted in response to IPAF’s request for clarification following the Bauma controversy. IPAF is calling for a ban on the use of cranes for circus rides at all professional construction shows.

“The Association of Equipment Manufacturers (AEM) and its Conexpo-Con/Agg show being held from 4 to 8 March in Las Vegas will not allow rides as a recreational item at the show,” said Al Cervero, vice-president of marketing and global business development at the AEM.

France’s Intermat show in 2015 is set to follow suit. “I cannot imagine allowing the use of tower cranes for some kind of circus ride at Intermat since the show is dedicated to promoting safety in construction and the professional use of construction equipment,” said Intermat director Maryvonne Lanoe.

IPAF CEO Tim Whiteman said: “IPAF’s members will not stand by such flagrant disregard of all safety campaigns that are aimed at ensuring that temporary work at height is performed by properly trained operators using machinery designed to lift people. While such fun rides may not contravene local legislation, they go against safety principles and industry good practice. Falls from height are still the largest workplace killer in Europe and in the USA, and circus entertainment has no place in the professional construction and lifting equipment industry. We welcome the statements from the AEM and the Intermat organisers. Powered access equipment is a safe and effective to lift people to perform temporary work at height. Our industry is safe and we strive to keep it that way.”