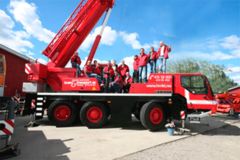 Specializing in mobile cranes, HMKT was established in 1985 and is based in Tromsø, northern Norway. According to Vest Kran, based in Agotnes, southern Norway, its new stable mate is one of the biggest crane suppliers in the north of the country.