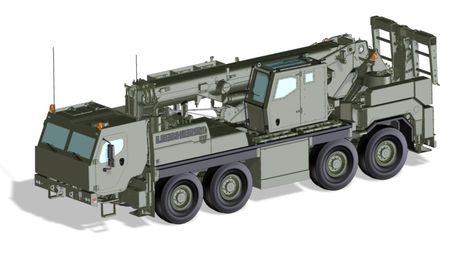 A key focus of the crane is to protect its occupants. Liebherr worked with leading European military technology company Rheinmetall Defence to produce the armoured driver’s and crane cabs. The special driver’s cab was extended by 250mm to provide storage space for the extensive personal protective equipment for the crew and integrate the military communication equipment.

The cab features a double-thickness steel bulkhead and special glass offering ballistic protection yet meets all road traffic requirements. The protection has been verified to STANAG 4569/ AEP 55. The crane cab is also armoured with composite panels bolted to a steel bearing structure – to reduce weight.

The four axle carrier is based on a standard All Terrain crane chassis, with all wheel steer and drive . Despite its weight and size it is said to have excellent off-road properties and manoeuvrability.

In towing mode, vehicles weighing up to 16 tonnes can be mounted on the lift cradle at the rear. An extensive range of accessories allows it to tow almost all German Army wheeled vehicles.

Simultaneously pulling with the crane winch and rescue winch

Two Rotzler Treibmatik winches are mounted on the rear of the vehicle, and the smaller winch can be moved to the front for self-rescue purposes. The chassis is also equipped with rescue jacks for recovering a damaged vehicle from difficult terrain. Synchronised winching allows a damaged vehicle to be raised slightly whilst being pulled by the other.

The G-BKF is fitted with a 20.9 metre main boom which can handle loads of up to 20 tonnes. All the crane’s control functions, the towing device, the two rescue winches and the jacks can be operated either from a protected position in the crane’s cab using the standard controls or from the ground using a standard Liebherr remote controller.

During development consideration was also given to extending the range of armoured mobile crane vehicles for the German Army so as many of the components as possible were ‘off-the-shelf’ items. One major requirement was that the machine must operate in exactly the same way as a standard Liebherr All Terrain crane for ease of training.

The main feature of this concept is its adaptability. Whilst there is not the need for rescues every day, hoisting work is almost always required, whether it involves containers or unloading a truck.