Commissioned by Breuer & Wasel, Austrian crane service provider Felbermayr lifted two gigantic pipes inside the cooling tower of the recently built Block 6 unit at the Šoštanj power plant in Slovenia. To perform this, the company used a Terex® AC 1000 as its main crane.

Normally, working in constrained spaces would be business as usual for Felbermayr Project Manager Michael Lehner, but the conditions that awaited him at the site in the Slovenian municipality of Šoštanj were anything but normal. In order to install two pipes, the Terex AC 1000 all-terrain crane would have to work together with a 500-tonne assist crane inside a cooling tower of a lignite-fired power plant.

Crucial centimeters: setting up the AC 1000

One side of the cooling tower had been left open so that the cranes could drive in, but that was the only concession that was given regarding space, the rest had to take place within an extremely limited space. To make things even more difficult, a tight schedule was set for the project. 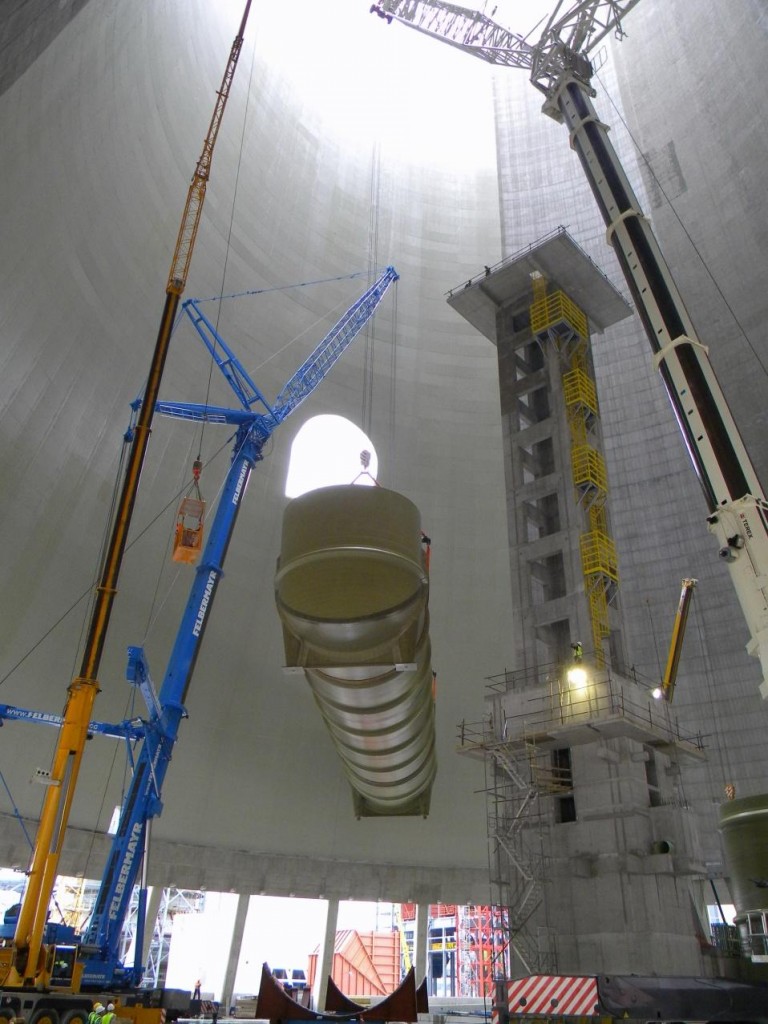 The crane had to be inside the tower and ready to start working at eight in the morning on September 26, 2012. “A total of five days – that was all we had to go in, set up, perform the lifts, tear down and take away the crane,” reports Michal Lehner. On September 24, 2012, the AC 1000 traveled 390 kilometers with its main boom on from Felbermayr’s Linz location to the site, accompanied by eleven transport vehicles carrying additional components.

The project’s first big challenge came during set up. Due to tight space conditions and the fact that construction work was still being done at the power plant, the team at Felbermayr had to follow a meticulous and precise plan. The first step was to place the AC 1000 inside the tower at exactly the right spot. The crane was then moved into position to an accuracy of ten centimeters so that it would be able to reach the working radii required for the two lifts.

Once the crane was in position, the necessary components were brought in with trucks. Only one truck could go into the cooling tower at a time, it had to be fully unloaded and then driven out of the tower before the next truck could move in. “Mounting the 42 meter-long luffing jib was one thing that really required laser-like precision from all those involved,” reports Heiko Stichler. The team managed to get the crane ready to go, with the boom extended as necessary, in just one day. “We configured the AC 1000 with a 42-meter luffing jib, 13-meter outriggers, and a counterweight of 108 tonnes for the lifts, which is where the AC 1000’s ease of setup became invaluable,” explains Michael Lehner. The main boom was set up with a length of 42 meters. Telescopic segments one through three were extended 90% each, while segment four was extended 45%. This set up provided the AC 1000 with a total boom length of 84 meters.

Double use: tandem and single lifts

On September 26th, the Felbermayr team was ready to perform the two lifts, a tandem lift and a single lift. The team performed the tandem lift first: A 40 meter-long plastic pipe with a diameter of about eight meters and a weight of approximately 37 tonnes (including rigging gear) had to be lifted to a height of 64.5 meters over a protruding edge of a height of 56 meters. Working at a radius of 28.6 meters, the AC 1000 picked up the load in tandem with the 500 t Liebherr assist crane. During the lift, the radius was reduced to 23 meters and the pipe was rotated 45° at a hook height of 64.5 meters, then it was set down on a concrete pipe at the center of the cooling tower.

The AC 1000 took on the second lift by itself: This time, the crane had to lift a 12 meter-long plastic pipe with a diameter of eight meters and a weight of 25 tonnes. Once this pipe was attached to the spreader, crane operator Robert Gruber lifted the load at a radius of 23.7 meters. Once lifted to a height of 78 meters , the AC 1000 was able to set down the second pipe on top of the first one. The particular challenge in this case was that crane had to hold the pipe in position for five hours until the special adhesive required to join the two pipes was fully cured. “That was easy to do with the AC 1000 as well. The crane had already proven to be an outstanding machine during the two lifts,” reports Robert Gruber, who not only found the crane performance on the road and the cab comfort impressive, but the short setup times as well – especially the time saved by the ease with which the outriggers were mounted and the fact that the main boom could be left on when traveling on the road.

The nine-axle Terex AC 1000 is the world’s most powerful all-terrain crane that can travel on public roads with its 50 meter main boom on. With 20,31 meters in length, the AC 1000 is remarkably compact and maneuverable for a 1,200 tonne capacity class crane. The machine can travel with its 50 m-long main boom on public roads to nearly any location in the world and has the fastest setup times of any crane in its category thanks to its patented luffing jib erecting system. Having a maximum system length of 163 m, the wide selection of extensions and attachments for the unit have been designed for transportation on standard trailer trucks, eliminating the expensive and time-consuming process of obtaining permits and having to use special-purpose vehicles.

The AC 1000 is available with a 50 or 100-meter main boom, which is equipped with a patented, open nose sheave that makes it particularly easy to attach additional boom segments. This allows short rigging times to reach a 100 meter lifting height. In addition, the optional SSL system increases the machine’s lifting capacity for a variety of applications.

The ergonomically designed crane cab, which can be tilted 20° upwards, is equipped with an integrated IC-1 touchscreen control system. This system allows operators to have quick access to important information such as wind speed, wind direction, hook load, rated lifting capacity, reach, boom length, and calculated and actual outrigger loads by simply tapping the screen.

Felbermayr Holding GmbH, headquartered in Wels, Austria, is the umbrella organization for 16 subsidiaries that focus primarily on transportation and lifting equipment, as well as civil engineering and building construction projects. The corporate group currently employs 2,000 specialists in the areas of special transportation, mobile crane and working platform rentals, heavy lift handling, civil engineering, and building construction. With 51 locations in 14 countries, the Felbermayr group of companies has a strong presence across all of Europe, and the fact that the transportation and lifting equipment industry and the construction sector complement each other so well has enabled Felbermayr to establish a successful position on the market as a full-service provider in both segments for years now.

Terex Corporation is a diversified global manufacturer of a broad range of equipment that is focused on delivering reliable, customer-driven solutions for many applications, including the construction, infrastructure, quarrying, mining, shipping, transportation, refining, energy, utility and manufacturing industries. Terex reports in five business segments: Aerial Work Platforms; Construction; Cranes; Material Handling & Port Solutions; and Materials Processing. Terex offers financial products and services to assist in the acquisition of equipment through Terex Financial Services. More information can be found at TEREX®