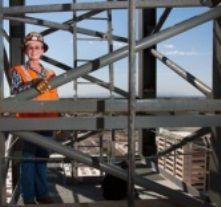 The operator of the 110 metre tower crane working on the new Maricopa County Criminal Court in Phoenix, Arizona, is unusual in more than one way.  First of all she is female, still a rare sight in North America and Europe. Secondly she is 69 years old and a great grandmother.  Nancy Jo Corley has been a tower crane operator for more than 25 years and has four children, eight grandchildren and five great-grandchildren. She rises early each day to climb the full 110 to 120 metres to the cranes cab.  Corley entered the construction industry in 1976, she was working as a cleaner and secretary in Texas, when her husband was forced to stop working after suffering from a stroke. Her monthly salary would hardly cover the rent, let alone put food on the table.  A local construction company was hiring, but would not consider employing a woman for construction work. Refusing to take no for an answer she visited their offices every day for three weeks and was finally offered a job at the Comanche Peak Steam Electric Station in Glen Rose, Texas.  Once on board she wanted to move up from being a general labourer and applied for more adventurous work, but was told that none of them were suitable for women. She persisted of course and gradually moved up the ranks to carpenter, the wrecking crew and then got a chance to train as a crane operator.  Since qualifying she has worked in nine states and spent three years on a job in Guam. Her current job is coming to an end, having topped out the steel work in April of this year.  Corley was recently interviewed in a local newspaper to read more: