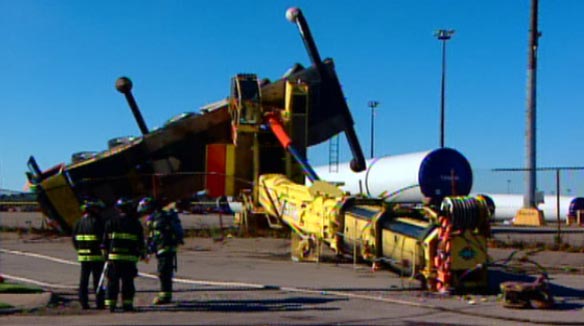 A large industrial crane has tipped over in Saint John, smashing through a fence and sending the crane operator to hospital.  The accident happened at about 9 a.m. Friday at a construction site near the waterfront.  Diesel fuel and hydraulic fluid have leaked out of the large yellow machine.  The falling crane destroyed a fence surrounding a parking lot and scattered debris, damaging nearby cars. The crane was being used to move large cylinders that are part of a wind turbine.  Witnesses at a nearby warehouse said they rushed outside when they heard a loud bang.  Danny Johnson, who was working at the nearby warehouse when the crane fell over, didn’t see it fall but he definitely heard it.  “It was pretty loud,” Johnson said.  “We came over to offer a hand if we could and hope for the best for the driver.”  The operator was taken to hospital as a precaution, but he is described as being in stable condition.