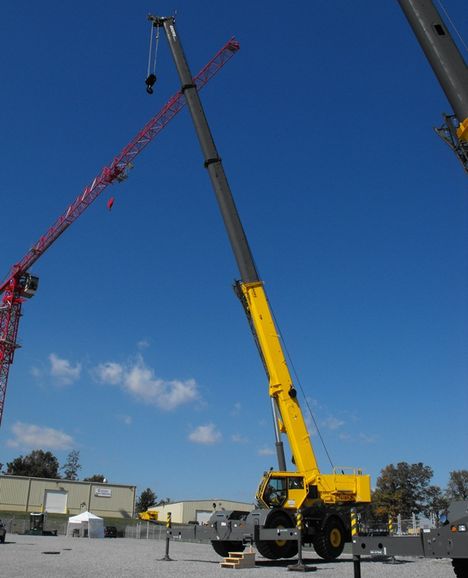 Manitowoc is showing the new 65 ton Grove RT765E-2 Rough Terrain crane, along with a range of other new products at a series of opens days – Crane Expo 2010- at its Shady Grove plant in Pennsylvania. The RT765E-2 will replace one of its most popular Rough Terrain cranes the RT760 of which it has sold over 2,000 units since its launch in 2001. The 765 builds on the success of the 760 maintaining its dimensions and much of its componentry. However it has a new – stronger base boom section, structural upgrades to the chassis and superstructure frame, a new telescope cylinder, new lift cylinder, larger counterweight and most noticeable the company’s new cab. The cab, which is also fitted to the new 150 ton RT9150E Rough Terrain, is noticeable for its much greater glazed area and improved ergonomics. It is being rolled out across the manufacturer’s range including the all truck cranes, Rough Terrains and the larger National Crane- boom trucks.