Babcock and ZPMC commissioned the new 1,000 tonne gantry crane today at the Rosyth dockyard in Scotland. 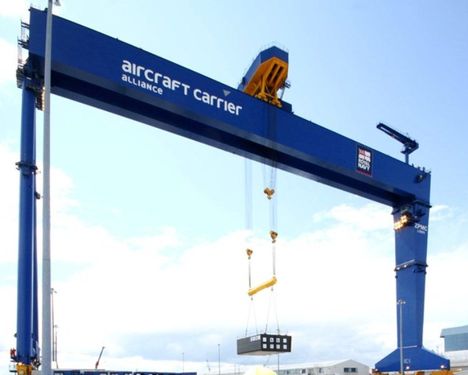 Apprentice welder Grant Rushton presented a ceremonial hammer to Archie Bethel, chief executive of Babcock’s Marine & Technology division, who in turn handed it to Kang Xuezeng president of ZPMC which manufactured the crane at its plant in Shanghai. 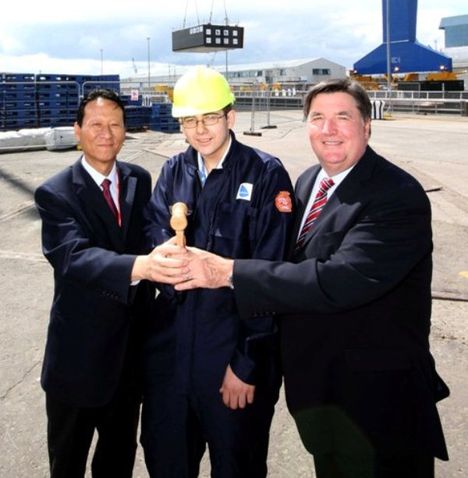 Kang struck the hammer on a gavel as a signal to commence the ceremonial lift, accompanied by a bagpipe solo from Paul Hendry, a project production co-ordinator at the Dockyard. The lift was followed by a fireworks display with music from Kirkcaldy high school pipe band.

The crane will be used in production for the first time in September when it will lift the 850 tonne inaugural block of the first of the Royal Navy’s two Queen Elizabeth Class aircraft carriers into the Rosyth dry dock.

The massive crane arrived in the Firth of Forth in March, following a 14,000 mile voyage from China. It travelled on a specialist crane transport vessel from ZPMC’s fleet, passing under the Forth Bridges at low tide on 4th March.

Bethel said: “The sheer scale of everything associated with the Goliath crane – its height, its width, and the enormous task of getting it to Rosyth from Shanghai – is a testament to the very significant efforts of everyone involved in this project from both ZPMC and Babcock. This is a significant milestone in the aircraft carriers project and on behalf of the Aircraft Carrier Alliance as a whole, I thank everyone involved.”