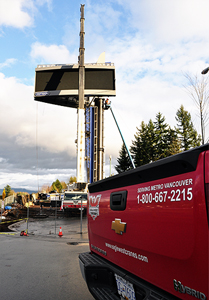 The first and largest of three new electronic signs in Abbotsford is now aloft. The 14×48-foot digital display, located on Salton Road next to Highway 1, will be used to promote the Abbotsford Entertainment and Sports Centre (AESC), community events and private businesses.  The sign installed by G & B Installs and assisted by A1 Signway is the first part of a 20-year deal between the city and Pattison Outdoor Advertising.

“We had always envisioned that we wanted to have a marquee sign to identify the entertainment and sports centre,” said city manager Frank Pizzuto.

Reaching up about 90 feet, the sign is located on city land, but the adjacent property had to be purchased.  “We had the right-of-way and it wasn’t quite enough,” said Pizzuto.  The city paid $685,000 for the property, which included a small house that will eventually be removed.

Pizzuto said most of the property will be resold, once it is determined exactly how much is required for the sign.

Under the agreement, Pattison pays all capital and operating costs for the AESC sign, and two smaller 10×20 structures to be built adjacent to the Abbotsford Visitor Centre and the municipal building.  Advertising will be secured by the Pattison group.

“We get a commission from ad sales, so there is some revenue coming in as a result of that. And there’s obviously visibility for the entertainment and sports centre and the city also gets a percentage of the time to basically do public service advertising,” Pizzuto said.  It is estimated city revenue, over the 20-year period, could reach $9.9 million. The city will also receive about $4.6 million worth of free advertising.

There is also an option for the city to request up to six more signs. Construction on the next one, located by the visitor centre, will begin in the coming weeks.