There has been another fatal crane incident on one of India’s major metro projects in Chennai last Wednesday night.

A crawler crane, a 75 tonne Tata TFC 280, was lifting 25 tonnes of reinforcing bar when the boom buckled, dropping the load from a height of around 22 metres onto seven construction workers waiting to receive it, killing one of them and injuring the other six.

The incident, which occurred at the Pachaiyappa’s College site, took the life of 30 year old Sindhu, while those injured were aged 20, 22, 25, 30 and 35. Their condition is said to be stable, although one is more critical than the others. 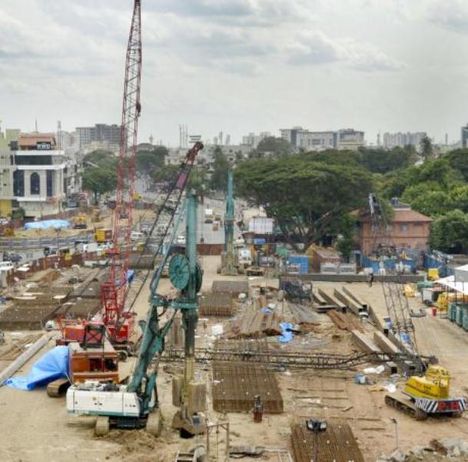 Police arrested the site manager for contractor Larsen & Toubro and the deputy project manager of Valecha Engineering, the contractor which supplied the crane as part of a sub-contract.

The police also said that that they were also looking to arrest Amalesh Yadav, 22, the crane operator who has been missing since the incident occurred.

According to Chennai Metro Rail Limited several investigations have been set up including its own. There are also investigations from Larsen & Toubro and Chinese based Shanghai Urban Construction Group the main contractors for the station and another by the general consultant.

Work was also suspended on Thursday and a full safety audit of cranes on Chennai Metro sites ordered.

K. Rajaraman, managing director of Chennai Metro said: “Work has been suspended to put in tighter controls in place. We will have all the equipment re-certified. The audit is expected to take two to three days and construction work will resume soon after. This is the first time that work on the Metro line has come to a complete halt since the project was launched in 2009.”

Chennai Metro has dumped the full blame for this incident on the 22 year old crane operator, who is still missing, saying that he set the crane up improperly positioning it 30 degrees off-centre, placed the load incorrectly and then caused a side load to be applied to the boom when he attempted to correct his mistake.

India’s metro rail sites have a horrific safety record and yet each time an incident occurs there is much hand wringing and always some quick arrests of relatively lowly employees, yet nothing changes. (Put Metro in the news search box to retrieve them)

Some of the cranes working on this site are very old and appear to be poorly maintained. This case is likely to have been caused by some form of overloading, exasperated by slewing the crane a little too quickly resulting in a side loading and boom collapse.

We have covered numerous incidents and near misses on Metro projects in Bangalore, Delhi and Mumbai over the past 18 months or so. India has some first class crane rental companies and yet a common feature of most, if not all, of the Metro crane failures is that they are almost invariably old cranes often supplied by non-mainstream suppliers – surprising for prestige construction projects. One has to wonder what role corruption plays in this fact?

The fact is that no matter what is going on people are paying with their lives for the use of substandard cranes and poor to non-existant lift planning on what should be landmark projects. It is a disgrace.