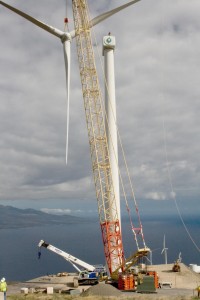 More than 2,000 mi (3,218 km) from the continental U.S., residents of the Hawaiian Islands have learned the benefits of being self-sustaining. If a good or service cannot be produced locally, then it has to be shipped in. There is much planning, organization, and expense associated with importing these conveniences of modern day living to the islands’ nearly 1.4 million residents.

This holds especially true with regards to bringing power to the islands. If it’s not locally produced, then fuel sources such as diesel, gas and oil are shipped in by barge.

This harsh reality is behind the State’s aggressive clean energy policy. State law mandates that by 2030, at least 70% of Hawaii’s power comes from clean energy sources, 40% of which must be locally produced from renewable sources. With this policy in place, wind energy is beginning to figure heavily into the State’s energy policy.

The Kaheawa Wind project is the first wind project in the United States with a detailed habitat conservation plan. A staunch believer that an environmentally friendly power source should be built in an environmentally friendly way, First Wind used the plan to be sensitive to the habitat and wildlife needs, while fulfilling the island residents’ need for clean energy.

This presented Buckner Companies and RMT with some interesting on site challenges during turbine construction. However, these were met through the use of its new Terex CC 2800-1 NT.

The Kaheawa project consisted of 14 turbine pads and most had one thing in common. “The pads were extremely small, and only one site (pad six) had enough space to assemble the crane,” says Jay Lusso, technical services representative for Hayden Murphy Equipment Company, a Terex Cranes distributor who was on site to assist with CC 2800-1 NT rigging and derigging.

The plan, according to Kevin Long, Buckner’s heavy lift project manager, was to erect a turbine and then move the crane under its own power to the next turbine pad without disassembling it. There was only one catch. The roads were extremely narrow. “The roads were only 20 feet wide, which meant a conventional 660 ton (600 tonne) capacity crane was too wide to navigate the roads,” says Long. Lusso adds, “We could not disturb the property at the sides of the road, since the grasses and habitat were protected.”

Conventional 660 ton (600 tonne) cranes measure up to 32.5 ft (9.9 m) wide to the tracks’ outside edges. Long admitted that the company considered completing the Maui project with a 440 ton (400 tonne) crawler crane to navigate the tight roads. In the end, however, “we wanted the higher capacity crane to deal with wind challenges, and we had the narrow track crane on the island,” he says.

Construction of the 1.5 MW turbines on Maui required 276 ft (84 m) of main boom with a 39.4 ft (12 m) fixed jib. The crane’s upper structure was equipped with 198 tons (180 tonnes) of counterweight for the maximum 70 ton (63.5 tonne) lifts to erect the turbines. With constant wind speeds on the West Maui Mountains often reaching 17 mph (27.4 km/h), RMT’s crews appreciated the strong load chart of the 660 ton (600 tonne) crane and its maximum wind load rating of 21.9 mph (9.8 m/s). “We faced consistently high wind speeds on the project, and the CC 2800-1 NT efficiently and effectively handled the wind,” says Long. “Having the higher capacity crane gave us more working days on the project.”

Once a turbine was finished, crews moved the crane to the next pad. “It was about 100 yd (91.4 m) between each turbine pad,” says Lusso. The CC 2800-1 NT’s remote control aided in safely moving the crane from pad to pad.

If the narrow roads weren’t challenging enough, the steep grades of the mountainous terrain added to the project’s difficulties. “We were traveling unusually high grades of up to 17.5%,” explains Long. With its maximum 10 degree gradeability, the Terex CC 2800-1 NT efficiently handled the steep grades, and its Quadro track drive helped with maneuvering by allowing the tracks to counter rotate to make tight turns.

Once back to turbine number six in May, they had enough room to disassemble the crane for transport to Oahu. Transport of the crane to and from the port and between Islands was arranged by locally owned general/mechanical contractor American Piping & Boiler Co. (APB), Kapolei, Hawaii. “Moving between islands was logistically challenging, but APB did a fantastic job handling all of the arrangements,” mentions Long.

Reflecting on the steep grade, narrow road width and ample capacity in a high wind application, Long marveled at the benefits offered by the CC 2800-1 NT. “That model crane is the only crane at that capacity that could do the project,” he says.

When using the narrow track crane at the Kawailoa Wind project on Oahu, Buckner noted one additional advantage offered by the CC 2800-1 NT: ease of assembly and disassembly. From June through mid-October, crews used the crane to build 30 of the larger 2.3 MW turbines. “Because of the challenging site conditions, we had to assemble and disassemble the crane three times,” says Lusso.

Hayden Murphy was on site each time the crane was disassembled to offer support and consultation. Additionally, the same remote control unit used to move the crane from pad to pad, is also designed to assist with crane assembly.

Even with the longer boom configuration and 50% higher capacity lifting requirement, Buckner did not need to equip the crane with its optional superlift for the project. Long reports this significantly improved crane assembly and disassembly efficiency. “The total disassembly and reassembly process took two to three days,” he says. “If we would have needed the (superlift) derrick, this would have added another full day to the process.”

The CC 2800-1 NT allowed RMT’s crews to efficiently install the larger wind turbines on Oahu as it did for the smaller turbines on Maui. With the opening of these two most recent wind farm projects in Hawaii, the total of First Wind’s turbines operating on Oahu and Maui generate enough clean energy to serve over 40,000 businesses and homes.

To ensure these turbines continue to harness the renewable wind energy at peak efficiency, Buckner will keep the Terex CC 2800-1 NT on Oahu for five years. The company has created a joint venture with APB, American Piping & Buckner, to assist with maintenance and service activities.

The Terex CC 2800 1 NT Crawler Crane offers a high return on investment and is among the most economical and versatile narrow track cranes in the 660 ton (600 tonne) class. Using a selection of specially designed accessories, the crane is convertible from standard (CC 2800-1) heavy lift configuration to Narrow Track crane (CC 2800-1 NT) and back, providing outstanding performance in a wide variety of applications, including wind farm sites, where extra heavy load capacity is a necessity.

Recognizing the high potential of the on shore wind turbine market and the subsequent need for dedicated equipment in the 660 ton (600 tonne) class, Terex Cranes developed the CC 2800-1 NT (narrow track) from the standard CC 2800-1 version to suit specific wind farm construction requirements. Equipped with its Narrow Track chassis, the Terex CC 2800-1 NT can be driven from one construction site to the next, even when access is tight, while fully rigged with counterweights, 334.6 ft (102 m) main boom and LF 2 fixed jib, saving precious time and increasing productivity.

With over 65 years of providing reliable, quality and safe services to the commercial and industrial markets, Buckner has earned its reputation as a nationally recognized leader for steel and precast erection and heavy lift cranes services. Buckner builds long term relationships with its customers based on confidence, trust and integrity. Offering exceptional project management, field supervision and experienced field crews, Buckner exceeds the client’s expectations safely, cost effectively and ahead of schedule.