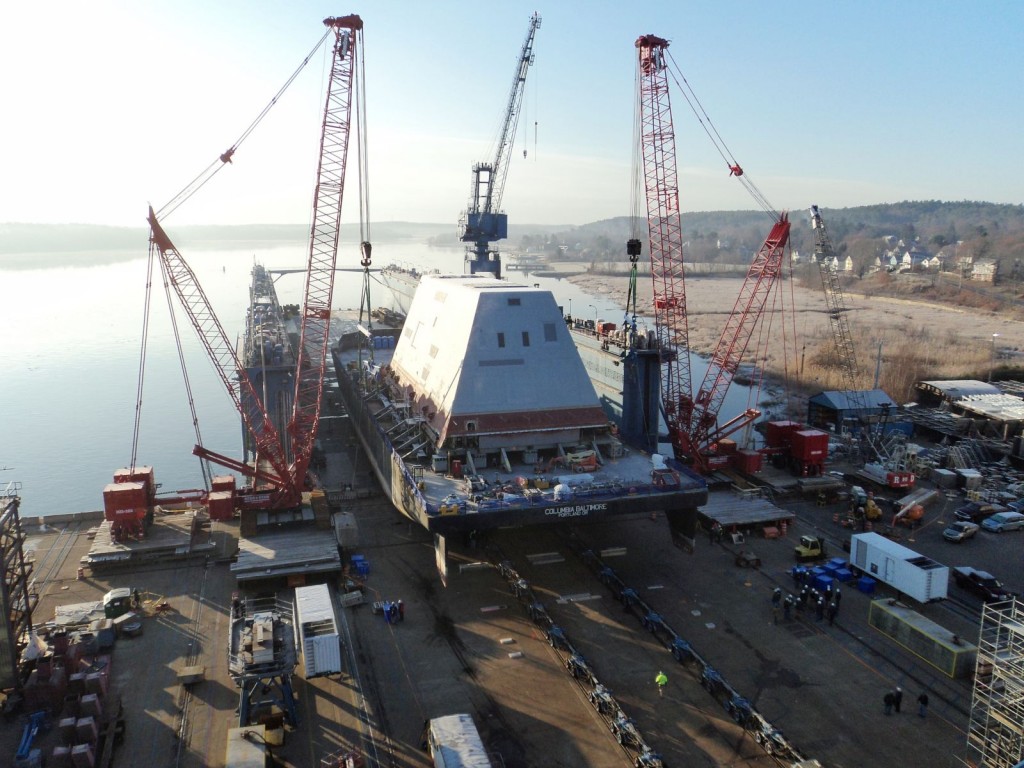 Bath Iron Works, ME.-based company and a subsidiary of General Dynamics Corporation has been building warships for the U.S. Navy for 128 years. This past December, Bath Iron Works broke its own heaviest lift record using two Manitowoc 16000 crawler cranes to pick nearly 1,000 USt – more than double the weight previously lifted by the shipyard.

The lift was part of a project to construct the Navy’s next-generation DDG 1000 Zumwalt-class destroyer warship. Along with two of the company’s 331 USt capacity gantry cranes, the two Manitowoc crawlers lifted a 992 USt deck house off of a barge and set it on the hull of the ship. The deck house contained the ship’s bridge, command center and battle room.

The two Manitowoc 16000s were setup to lift at their full capacity, requiring the use of MAX-ER attachments, boosting their capacities to 440 USt. The crawler crane features a 315 ft boom – though, for this lift it was rigged for 157 ft – an EPIC control system and a closed-loop hydraulic circuit system, which enables independent, variable-speed operation of the swing, load hoist, boom hoist and travel functions.

The deck house was lifted from a barge to 89 ft in the air and held in place for three hours. Twelve nylon straps held the deck house while the barge was moved out from underneath it and the ship, which weighed 13,228 USt, was floated into place underneath. Finally, the cranes lowered the 155 ft long by 60 ft tall deck house onto the ship’s hull. The completed vessel weighed nearly 14,330 USt.

Woolwich, ME.-based contractor Reed & Reed oversaw the lift, which included renting the cranes to Bath Iron Works and supplying their operators. The company has been working with Bath Iron Works since 1928, when it was founded. It chose the Manitowoc 16000s, the largest capacity cranes in Reed & Reed’s fleet, because the lift required two matching cranes for uniformity and simplicity. Reed & Reed has a regular stream of work for its 16000s, mostly for the construction of wind turbines.

“We’ve been very pleased with our Manitowoc cranes,” said Mark Buckbee, director of the bridge and marine division at Reed & Reed. “They are the workhorse cranes for wind turbine assembly. The equipment is very reliable and capable, and we get great support from Manitowoc to help make our applications work for our clients.”

“The Reed & Reed team provided outstanding support and guidance throughout the entire process of planning and executing the lift,” said Dennis Masse, area manager of service trades at Bath Iron Works. “Our two companies have a long and close relationship, as we’re located across the Kennebec River from each other. Working alongside true professionals is always a pleasure and that certainly was the case with our friends from Reed & Reed on this job. This whole evolution was a classic example of what two Maine companies can accomplish together.”

Manchester, CT.-based Shawmut Equipment sold both the cranes to Reed & Reed and acted as liaison between Bath Iron Works and Manitowoc, providing important logistical information for the project. In all, the lift took 18 months of planning among Bath Iron Works, Reed & Reed, Manitowoc and Shawmut Equipment. Manitowoc provided a full-time factory representative to the job site that instructed the crew on proper transport, assembly procedures, testing and lifting for the project.

“Shawmut has been a tremendous resource for us,” Buckbee said. “We’ve just begun doing business with them over the last five to six years and we purchased the 16000s from them. They’ve been very responsive and helpful in getting us the right machines and communicating with Manitowoc for information we might need before picks.”

Planning work involved all manner of details, for example, the pier beneath the 16000s on the lift had to be reinforced with steel bridge girders to support the heavy load. Also, the work of ship-fitters, welders, carpenters, riggers, engineers, facility personnel, the crane operators and representatives from the Navy had to be coordinated and incorporated into the master plan.

“This type of construction and lift has never been done before at Bath Iron Works,” Buckbee said. “As you can understand, putting a $250-million deck house onto a $1-billion warship takes a lot of planning and outfitting beforehand. The Navy had a huge investment in this lift.”

After the success of the first lift and construction, two more DDG 1000 Zumwalt-class destroyers are under construction and due at Bath Iron Works in the next year. Bath Iron Works’s 5,200 employees, Reed & Reed, Shawmut Equipment and Manitowoc all look forward to more record-breaking lifts.

“Manitowoc’s reputation is well established,” said Greg Bridgman, senior facilities heavy lift and transport engineer at Bath Iron Works. “To the best of my knowledge, this was the first time the shipyard has ever used the specialized cranes that were brought in for this operation. Everyone was impressed with the capabilities of the equipment, and the performance of the two cranes was flawless from start to finish. Great equipment operated by top-notch professionals always makes for a good outcome. Having Manitowoc support on site added to the confidence we already had that we would get the job done.”