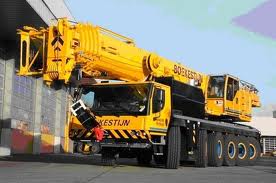 Liebherr unveiled a new 150 tonne capacity, six-axle all terrain crane at the SMOPyC exhibition in Spain in late April.  The LTM 1150-6.1 offers a 66 m telescopic boom, the longest in its class. It has a maximum hook height of 93 m and maximum radius of 76 m with extensions and a double swingaway jib.

“At a boom length of 60 m the crane can lift up to 11 tonnes and is, therefore, ideally designed for the assembly of tower cranes,” said the company. At full reach the boom can lift 7.7 tonnes. For assembly jobs, a second winch and a 2.9 m jib are available, as is a boom nose.

Another advantage, says Liebherr, is the crane’s ability to carry 15 tonnes of counterweight with an axle load of 12 tonnes and a gross vehicle weight of 72 tonnes, making it a true taxi crane, commented the company.

Using the 15 tonne maximum transportable counterweight the machine can lift up to 11 tonnes. “By this Liebherr extends the concept of the ‘all-in cranes’ up to six axles and introduces the strongest crane of this design principle to the market.”

The carrier is 13.5 m long and the LTM 1150-61 has a turning radius of 11 m, which is only slightly larger than its five axle contemporaries in the 150 to 160 tonne capacity class. All six axles are steered, meaning they do not need to be lifted for crab steering.

Testing times for the truck crane