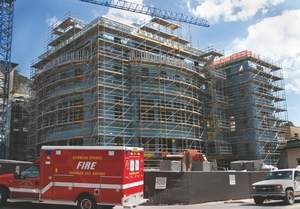 For nearly a year, it’s become a familiar landmark, visible from most points in south Glenwood Springs. JE Dunn Construction’s massive, royal-blue tower crane may be the tallest contraption in the sky.

But don’t get too used to seeing it.

Rawlins said the crane has been indispensible to Valley View’s recent project, as was the crane used before it during the hospital’s earlier expansion.

He said it’s one of 35 to 40 cranes JE Dunn owns and operates at the company’s numerous commercial construction sites around the country. The cranes, manufactured by Linden Comansa of Spain, have a unique flattop design, which means that no overhead wires are used to operate it.

Run by a union operator, the crane is subject to a stringent crane safety program that includes an initial 48-point crane inspection that is repeated every 300 hours of operation or six weeks, whichever comes first. Compulsory daily inspections are also performed.

“We use the crane constantly, for moving steel and concrete, and for flying trusses,” Rawlins said. “We’ve had it operating here since the beginning.”

By late November, Rawlins anticipates that the majority of the heavy lifting will be done at the Valley View site, which means the crane can be dismantled for transport.

“By then, we’ll still have some outside construction, which we’ll need to tent and heat, but the bulk of the work will be inside,” Rawlins said.