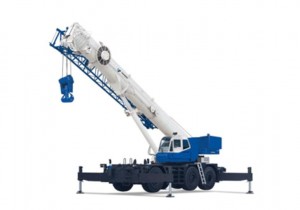 Its 61 m six section formed boom will be the longest in its class, the Japanese manufacturer said. Two versions will be available. As the 160 US ton capacity GR-1600XL-2 it will be sold in the Americas while in all other markets it will be known as the 145 metric tonne capacity GR-1450EX-2.

Target markets outside Japan are the energy sector in North America and the Middle East, plus mining sites in South America and Australia. The new crane is a big step up from the 100 tonne capacity existing range-topping model. It was developed in response to customer demand for more capacity and a longer boom, Tadano said.

Extra reach is available with a two stage (10.3/18 m) bi-folding lattice jib with hydraulic angle adjustment to give a total boom and jib combination length of 78.3 metres. The jib extends the maximum working radius from 56 m on the main boom to 64.9 m with the jib. A tilting cab helps the operator get a better view for safer operation.

Transport is simplified with a self-assembly system for the counterweight and outriggers, which means no assist crane is needed. Fuel consumption for the 200 kW Mitsubishi 6M60 engine is controlled by a monitoring system with Eco-mode to minimise it during operation and Positive control is for when the crane is on standby.