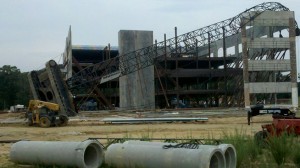 A large construction crane flipped over in a Stafford County business center on Wednesday and wrapped around a building. The accident happened in the Quantico Corporate Park around 11 a.m.

Stafford County Fire and Rescue said that at 200-foot crane had toppled over, folding its arm around a 4-story unfinished building on the site. The crane had been lifting a heavy panel when it went over. Bob Stevens, a construction worker who was near the incident, said he watched as the operator “rode it out” as the crane impacted the building.

The operator told officials that immediately before the machine went over, he felt the ground giving out. He was treated on the ground with minor injuries. Workers had poured concrete on the ground beneath the crane to form a pad, but it was not enough to keep it from falling.

A fire official on the scene told News4 that the accident would likely take a week to clean up, and damages could run into the millions. Construction at the site is part of the BRAC relocation program. The crane had been working on an office building.