A crane boom collapse caused a heavy load to drop around 30 metres onto a van during the Bauma breakdown last week.

Thanks to fast reactions from the operator and colleagues a man escaped unhurt from what would have been a life ending experience.

The crane was dismantling an asphalt plant last Thursday at the Munich site, and the riggers had attached a 10 tonne component for the crane to lift down – reportedly from a height of 30 metres.

As the crane slewed the load away from the plant, the base section of the six section boom began to twist. The operator noticing this began to lower the load as fast as he could, the line of the boom was however over the top of a van to which a member of the crew had just retired for a break.

The crane operator and rigger screamed at him to get out of the vehicle and thankfully he responded immediately and managed to dive clear as the boom and load came down. 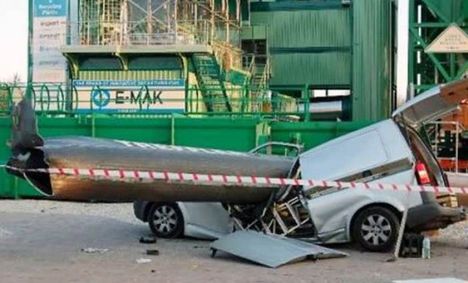 The boom crushed the van completely

After the boom started to give way it sheared completely around halfway up in the third section, which came down on the van completely crushing it.

The man who escaped, a 49 year old from the UK, suffered only mild lacerations from flying glass and no one else was affected, even though there were around 25 people in the immediate vicinity.

The crane operator, an employee of local crane rental company Treffler appeared to be suffering from shock immediately following the incident, as was the fortunate escapee.