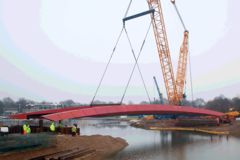 A new bridge has been lifted into place at the Eton College Rowing Centre at Dorney Lake near Windsor ahead of the London 2012 Olympic Games.

The placement of the new bridge, which will provide increased access to the finish line area of the venue and improved areas for athletes to warm-up, keeps plans for “an enhanced rowing and canoe sprint facility” on track, according to the Olympic Delivery Authority (ODA).