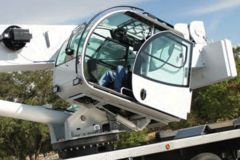 Manitex is introducing a sleek, new cab for its boom truck line this week at ICUEE, October 4-6 in Louisville, Kentucky. The cab features curved glass for better visibility, a 0 to 20-degree cab tilt, a mini-van style automotive door and sliding windows on both sides of the cab.

The new Manitex cab features a heated cloth seat with eight seat adjustments, lumbar support and an adjustable head rest. It features a standard diesel-fired heater, a retractable sun screen and a rear, pop-out window. The cab was designed with a 12-volt DC outlet for cell phone chargers and features a cup holder.

The new hydraulic system was redesigned for greater efficiency and relocated to the turret to allow for a more quiet cab.

Options on the new cab include an air-conditioner, work lights and a heavy duty stereo radio with weather band.