A five axle All Terrain crane lost its balance in Mineola on the north east side of New York City yesterday.

The crane, a Liebherr owned and operated by Bay Cranes, has been working on the new Winthrop University-Hospital Diabetes Research Centre for some time. No one was injured in the incident, although the operator suffered minor injuries to his neck and back when he jumped from the listing crane. The main contractor is Lend Lease. 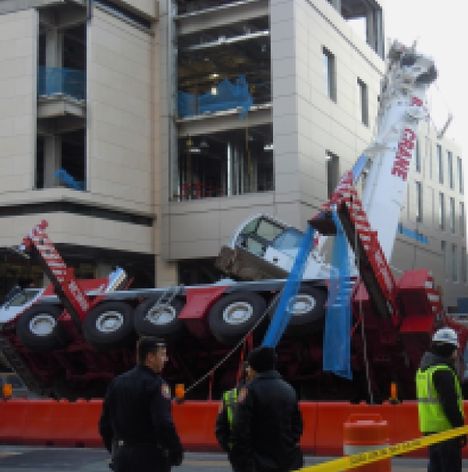 The outriggers did not manage to stabilise the crane sufficiently

A spokesman for Winthrop said: “At the time of the accident, the crane was being repositioned to a new location on the site. There were no serious injuries and there is no damage to the building or any surrounding buildings.

The crane operator, who walked away under his own power, complained of a slight bruise on his head and is being evaluated at Winthrop as a precaution.” 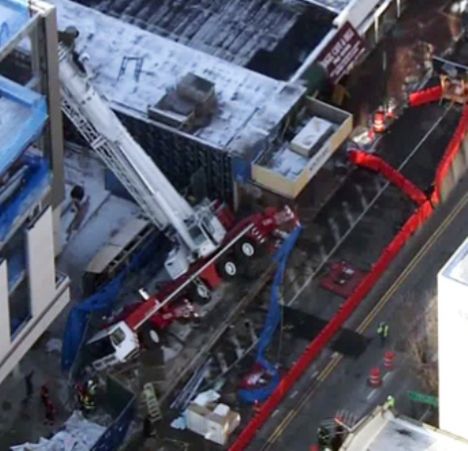 An aerial view of the site

So it would seem that the crane had lifted its outrigger jacks, in order move further down the street with counterweight in place. The ground must have given a little under the wheels and the outriggers on that side of the crane did not provide enough stability to keep the crane completely upright.

Bay Crane is one of the very best operators there is, and always takes great care over job planning and maintains its cranes in tip-top condition. But it goes to show that it can happen to the best. The crane does not appear to be damaged too much and will be pulled back upright.

I imagine someone is now wishing that they had stowed the boom and possibly removed some counterweight before moving?