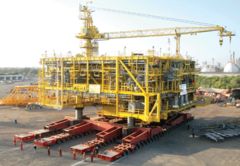 The record load was an offshore module for main client Maersk Oil Qatar built by Larsen & Toubro in India. Lift & Shift, which is part of the Natvar Parikh Group, moved a total load out weight of 3,300 tonnes for L&T. It included the 2,400 tonne HA deck process platform, 550 tonnes of axles, 200 tonnes of load spreaders, and 100 tonnes of barge grillage.