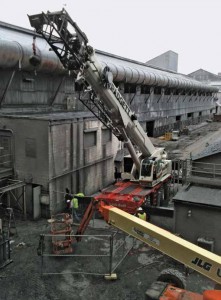 Demand for rough-terrain cranes of all sizes remains high, If the U.S. construction market turns a page in 2013, rough terrain cranes will lead the way. These stalwarts of the crane industry are easy to set up, easy to use, and ready to work. They remain popular among crane buyers, as evidenced by multi-unit purchases inked during the second half of 2012. Rough-terrain crane manufacturers and distributors are committed to keeping up with demand through new model introductions at both ends of the capacity spectrum, as well as visibility in new geographic markets.

Padgett Inc., Albany, Ind., utilizes its fleet of RTs most often in steel erection because they’re dependable, especially on long term projects, says Don Fell, project manager. “These types of cranes are relatively simple to transport and leave on a project site for an extended period of time,” he says, “which enables us to use the truck crane fleet for daily will-calls.” Utilization trends Miron  construction, a Neenah, Wis.-based general contractor, has seen demand for larger RTs in its line of work. Pete Klosterman, vice president of field support services, says that as with most end users, increased boom length has been a factor in the trend toward larger cranes. He believes 2013 will be similar to 2012 where RT demand is concerned, although utilization will shift toward jobs of shorter duration.

Limited setup space or requirements for frequent relocation will dictate the types of applications where RTs are most visible, says Klosterman: “We often work on projects where poor soils are common, but [applications of] short duration, [with] limited setup space, [involving] frequent relocation are even more prevalent.” That, he explains, is why features such as steering options to enhance maneuverability, mobility, and boom/jib length are important. “Efficiency is vital,” he adds.

Miron Construction provided multiple Grove RTs on an upgrade and expansion project at Lambeau Field, Green Bay, Wis., last summer.  The RTs were among throngs of Manitowoc cranes chosen because of the site’s expansive area and multiple work locations, as well as the radial shape of the stadium. The Grove RTs helped unload structural steel, drywall, and other construction materials as well as feed electronic components up to the stadium’s new north end-zone scoreboard.  Miron Construction was also awarded numerous utility tunnel rebuild projects at the University of Wisconsin-Madison. Multiple RTs are being used on the project because of space constraints. “[The tunnels] present extremely constrained sites in close proximity to existing historical buildings,” says Klosterman. 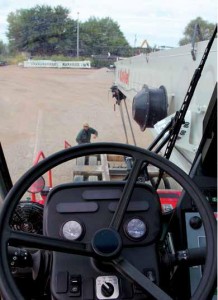 “The RTs were utilized to form, pour, and strip the concrete tunnels, frequently moving in and out of high-traffic areas.” Demand for RTs in steel erection was high during 2012 in the region Padgett serves, and Fell says the capacities most widely used ranged from 50 to 75 tons. He speculates that as more money for infrastructure projects comes down the pike, the crane company’s RT fleet, which ranges from 35 to 130 tons in capacity, will definitely be busy. “Ground is being broken for two new bridges spanning from Kentucky to Indiana,” he says. “Padgett would like to have the opportunity to provide our services and equipment for the project. Now that the election process is complete, investment in the infrastructure of our country is needed.

The need for these types of cranes should be even better in 2013.” In 2011, Padgett purchased a 130-ton Link-Belt model 80130 Series II, which has proven to be an efficient machine, due to its capacity and reach. “Easy to transport and is capable of being set up in confined areas, the crane is equipped with a hydraulic luffing jib which enhances the reach,” says Fell. He reports the 130-tonner was used recently to erect the steel for a 100-foot elevator structure at Carbide Industries in Louisville, Ky. “The structure was erected at the Carbide plant and the accessibility to the area was limited,” he explains. “We were restricted due to the area where we had to set up, but we needed the reach to erect the steel.” In the southwest, Crane Service Inc., Albuquerque, N.M., reports an increase in calls for its RT cranes. Chris Martin, marketing coordinator, says the trend is apparent on both the rental and purchasing ides of the business. Because rough-terrains tend to be harder to find for bare rental or purchase, rentals trend towards higher capacity machines, he says, quickly adding, “this isn’t to say that the lower capacities, like 50-ton RTs, aren’t sought after.”

Crane Service takes advantage of the fact that there are so many different and unique applications for RTs. An uptick in demand for the machines, handy in wind parks as tailing cranes, is anticipated now that the production tax credit has been renewed. “We have seen an increase in usage in refineries and the oil and gas sectors, as well,” says Martin. “As for a crystal ball answer, that is tough. I will say this: We are expecting an increase in RT utilization versus 2012.” A good portion of Crane Service’s RT fleet, which ranges from 30- to 100-ton capacities, goes out for bare-rental assignments.

When they aren’t working as assist cranes or for material handling, they’re off rent as yard cranes. At press time, the company had an RT working as a construction crane on a new gas plant build. “The reason the RT was selected is its ease of maneuverability and its ability to move within confined spaces,” explains Martin. “When loading compressor skids, pipe racks, and the essentials of a gas plant, you need to have a low footprint.”

In 2012, Crane Service Inc. purchased four rough-terrain cranes, two each of Link-Belt’s RTC8030 II and RTC 8050 II models. Martin says the company plans to expand its RT fleet even further in 2013 with an eye toward increased demand for the machines in all sizes.  Last fall, Independence, Ohio-based ALL Erection & Crane Rental Corp. finalized the purchase of a dozen new Link-Belt RTC 8080 Series II rough-terrains.

As the buyer of the first large package of the new Link-Belt crane product, ALL’s purchase agreement was for an additional 12 units that included 65- and 130-ton RTs. “We have confidence in the quality of Link-Belt cranes,” says Michael Liptak, president. “That’s especially important right now when we are so busy, and Link-Belt’s new rough-terrain model meets a tonnage and classification demand that is currently very high.” Liptak also noted that Link-Belt’s customer support is an advantage for both ALL and its rental customers. Houston-based Global Cranes Sales, and crane manufacturing partner Zoomlion, announced the delivery of the first 15 of 20 Zoomlion RT cranes which The Sarens Group, one of the largest global crane rental companies, had purchased last September.

Sarens already had 10 Global/Zoomlion Model RT55 cranes in its fleet, and inked the new purchase at France’s Intermat show last April. The order included ten 40-ton RT35s, and ten 60-ton RT55s for its North Africa fleet. Sarens also is considering more integration of the Global/Zoomlion RT product into the rest of its worldwide fleet.  In June, Imperial Crane opened a fourth office in Roxanne, Ill., in order to break into the St. Louis crane market.

The company announced long-term plans to expand throughout the U.S., growing both daily rentals and large, long-term projects. The Roxanne branch offers Imperial opportunities for both, and to keep up, the company purchased a multimillion dollar crane package that included Tadano RTs which were set to arrive in 2012.  Imperial has experience in refinery turnaround and maintenance work, and, according to a news release announcing the new location, plans to take advantage of close proximity to a Conoco Phillips refinery in the area. Additionally, Imperial is the preferred vendor for a refinery moderation project at BP’s second-largest refinery in Whiting Ind., and has been in the Lemont, Ill., CITGO refinery for more than 30 years.

In with the new 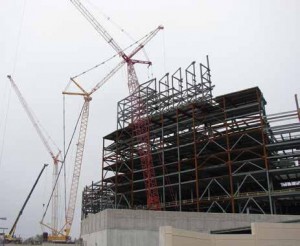 At press time, the cat was let out of the bag, via YouTube video, on Terex’s new 110-ton Quadstar 1100 rough-terrain crane.  Engineered with extensive input from customer workshops, the crane features a 154-ft. “dual-mode” double-keel boom. With dual mode, an operator can first extend either the boom’s lighter section, for higher capacities at greater radius, or its stronger sections for work at shorter radius. The crane’s standout features, though, are its name, and the new look and feel of its cab. Both were  designed after extensive input from customers, says Agustin Dominguez, global marketingfor Terex.

The RT’s maximum tip height is 164 ft. with main oom; tip height maxes out at 236 ft. with two jib sections and pullout. It has three-mode steering and a compact chassis for better jobsite maneuverability; a purpose-built frame and drive train system; and a hydraulic tilting cab to 18°, designed for enhanced boom tip visibility.

During its CraneFest last fall, Link-Belt debuted the Series II family’s newest addition, the 80-ton RTC 8080, of which ALL snatched up a dozen units. Replacing the RTC 8075, it is equipped with all the cutting-edge features customers and operators like in the Series II line, such as platform guardrails, a three-piece bi-fold fly jib, and improved capacity.  The RTC 8080 Series II has a 41- to 127-ft., four-section,  full-power, formed boom. Its design incorporates Link-Belt’s standard Teflon wear pucks impregnated in the wear pad

surfaces so the boom requires no grease. An available remote control boom flood light at the base of the telescopic boom can be used as a spotlight in nighttime settings. The boom, combined with removable, modular counterweights, helps reduce the transport weight to under 90,000 lbs.

In November during Bauma China 2012, Global Crane Sales/ Zoomlion unveiled the 110-ton Zoomlion RT100 rough-terrain, which joins the RT35, RT55, and RT75, all sold worldwide.  Global is the exclusive international distributor of Zoomlion RT cranes. The RT100 has a 141-ft. formed boom, and a 35- to 60-ft. jib offsettable at 0°, 20°, and 40°. It is engineered for maximum capacity at radius for its weight.

Initial dealer orders totaled approximately $1 million, and demand for configurations specifically designed for use in the refinery sector was high.  The first deliveries were scheduled for the fourth quarter of 2012.  “This new product launch extends our offering further into the energy sector, an industry which has been a huge driver of Manitex International’s growth in the last 12 to 18 months,” says Ed Samera, general manager of Badger Equipment, Winona, Minn.

The CD4415 has a 15-ton rating at a 10-ft. working radius, maximum boom length of 62.5 ft., and maximum tip height of 85.5 ft. “There is an installed base of at least $100 million in aging and underperforming equipment currently in service at U.S. refineries, and our entry into this market with new equipment and replacement parts will be the initial focus of our marketing efforts,” says Samera. “New geographic and end-user markets offer incremental opportunities to expand the Manitex footprint with this new crane.