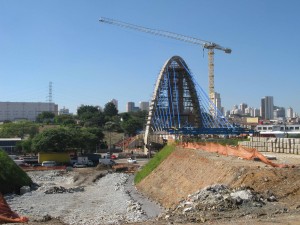 A Liebherr 110 EC-B6 flat-top tower crane is being used to construct a new cable-stayed roadbridge that has been designed as the gateway to the eastern sector of Sao Paulo, the largest city in Brazil.

The works are being carried out for the Department of Urban Infrastructure and Works (SIURB) at Sao Paulo Prefecture by main contractor Construbase Engenharia Ltda, who are renting the Liebherr crane from Locar Guindastes e Transportes Intermodais, the biggest crane hire specialist in Latin America.

The Padre Adelino cable-stayed bridge and the other new bridge, the concrete-pier-supported Catiguá bridge, will link the neighbourhoods of Tatuapé and Bristol, and their sliproads will allow access to the Radial Leste, one of the main corridors of the city.

Padre Adelino has been designed as a single-arch, single-span bridge with a 122-m long viaduct that is 20m wide and has three lanes in both directions. 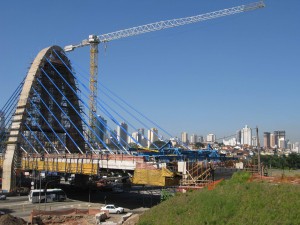 This design was chosen because it allows the use of lighter building slabs that are only half a metre in thickness, thereby maximising the height available between the bridge and the road surface and allowing the passage of large trucks.

On each side of the arch of the bridge are 20 stays each consisting of 48 steel cables, the stays painted an eye-catching blue colour to enhance the appearance of the bridge which the mayor of Sao Paulo has declared to be the gateway to the eastern zone of the city.

Construbase is using a system of travelling formwork that does not require the disruption of the heavy traffic flow beneath and around the bridge, and the Liebherr 110 EC-B6 was selected because of the ease of transporting and erecting the crane, whose compact head module contains the hoist gear, slewing gear, central switchgear and the complete ball slewing ring support.

With this combination of lifting and forming technology, the contractor has been able to minimise any restrictions to traffic flow. The crane, which was moved onto the site in February 2008, was supplied new to Locar by Liebherr Brazil, which is based in Sao Paulo.  The Liebherr engineer who initially helped install the crane, Gustavo Ferreira, said that originally the 110 EC-B6 had been using its full jib length of 55m, but as the project had evolved this had been reduced to 40m.

“In the early phase of the project the contractor had needed maximum reach, but as the work progressed and the lifting became concentrated around the arch of the bridge, the length of the jib was shortened to obtain faster and more responsive handling, and for greater ease of operation.” 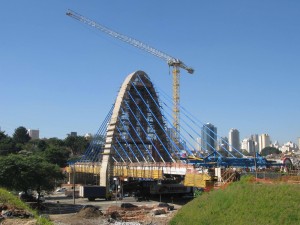 The 110 EC-B6 has a maximum lift capacity of 6t, which reduces to 1.5t at the maximum 55m length of the jib. The crane has an underhook height of 51.1m. Work on the bridge is now in its final phase, and the structure is expected to be completed by October this year. The cost of the Padre Adelino Bridge is 114 million reais (USD64.5 million) and the project has directly employed a workforce of 320.