Five tower crane erectors in Bangalore, India died yesterday after the climbing platform/frame they were using gave way and fell around 50 metres to the ground.

Reports from the scene are sketchy, some say the five were on the top of the crane to replace a motor, however we understand that the five were in fact climbing the crane. The men were standing on the climbing platform/frame when one or more pins or rods broke on the platform/frame allowing it to fall to the ground.

The men were named as Avatar Singh – 26, Vikram Singh – 28, Baljeet Singh – 25, Srikanth – 29 and Amarnath – 30. Amarnath died after reaching the hospital while the others were declared dead at the scene. None of the men had been wearing safety harnesses. 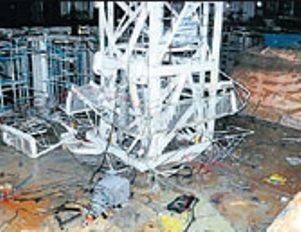 The accident took place at a large apartment construction site owned and managed by DLF Homes. While the company would not comment directly, DLF senior executive director (South) J K Subrahmanian, issued a statement saying: “DLF regrets the unfortunate mishap which occurred at its site at Begur, resulting in the tragic loss of lives of its contractors’ employees.”

The statement also said that the company will provide the next of kin with an ex-gratia of Rs500,000 ($11,000) immediately. The police have registered a negligence case against DLF.