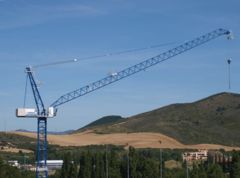 Linden Comansa’s LCL Series of luffing jib cranes will be completed in September, with the launch of a fourth model, the LCL 165.

The LCL 165 will include 8 and 12 tonne capacity versions. Maximum jib length will be 50 m, with jib steps every 5 m. Maximum freestanding height will be 56.6 m, although it will be able to reach higher when its tower sections are combined with tower sections from other series’, says the manufacturer.

The 8 tonne version will come with a 24 kW hoist (37 and 50 kW hoists are optional), while the 12 tonne version offer a 50 kW hoist, with a 65 kW optional device. Both versions include the Effi-Plus system, which increases the hoist speed with light loads.

The new model includes all other specifications of the LCL Series:

Modular design, meaning most of the jib and tower sections are interchangeable across the series.

Light and compact design, for easier transport and erection.

Level Luffing control system, allowing the operator to move the load horizontally by pushing a button while applying the luffing movement.