On the edge of Great Mosquito Cove in Trinity Bay (Newfoundland & Labrador), crane operator Sherry Smith climbs each day to the top of some of the world’s tallest cranes — her office space. 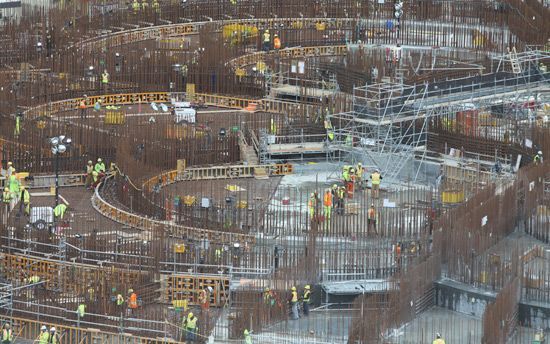 The tower cranes at Nalcor Energy’s Bull Arm Fabrication Site, located about 150 kilometres from St. John’s, were shipped to the location in pieces. Assembled, they are now in use on construction of the Hebron gravity base structure (GBS).

“You have crane-to-crane radio. If Crane 2 is making a pick (up), they have to contact the cranes on either side of them and let them know they’re swinging left or right and they’ve got to come back and say, ‘OK, you’re clear to swing,’” she said, when asked about how the crane operators communicate in their construction site crow’s-nests.

She spoke with The Telegram Monday (June 17), standing at a lookout point overseeing the GBS construction site.

There is a “collision factor” to consider, she said, with five tower cranes active around the emerging, 130-metre-wide base of the GBS. For comparison, an NFL football field is about 110 metres long.

“We have amazing signalmen on the ground. They trust me and I trust them. They wouldn’t steer me wrong,” she said.

Smith followed her father, Max Smith, into crane operations. She did a course in Holyrood in 1997 and followed it up with work in St. John’s, at Voisey’s Bay and on offshore oil projects. She started on the high tower cranes while on a project in Alberta.

Project lead Geoff Parker said providing a safe work environment for Smith and others is an important consideration for the Hebron project partners.

He confirmed for The Telegram a trio of near-miss incidents at a worksite in Marystown led to a day shutdown for a safety in-service.

“We’ve done similar things out here at Bull Arm. We’ve had several times where we’ve just said, ‘Let’s stop, take time out.’ And I think it’s good because it demonstrates our commitment to safety,” Parker said.

“Safety really is our No. 1 value here on site.”

When The Telegram was last able to photograph the Hebron GBS work at Bull Arm — on Oct. 31, 2012 — about 400 people were employed on site. The number now stands at more than 1,700 and is expected to peak later this summer at about 2,000.

Public tours to the lookout at the Bull Arm Fabrication Site are being offered beginning July 2, starting from the information centre just off the Trans-Canada Highway.