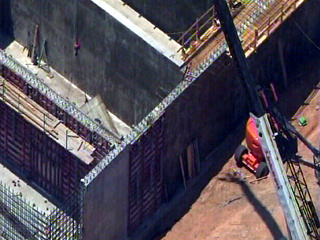 A tragic end for a Houston man killed in a construction accident in Richmond Tuesday afternoon.

A company was building a “water detention” area near Mission Bend, according to a Fort Bend County Sheriff’s Office spokeswoman.

The victim was working about 25 feet down in a hole around 1:15 p.m. A crane was lifting a metal “form” when it slipped and struck the victim in the head.

The 28-year-old was pronounced dead at the scene.

SkyFOX was overhead around 2:30 p.m. The victim’s body could be seen under the shadow of a large, square piece of metal.

Due to the graphic nature of the image, it was not posted with this story.

Investigators are continuing to look over the scene.