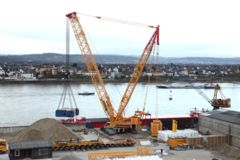 The LR 1600/2 was used to unload parts of a press weighing up to 335 tonnes at the industrial port of Bedorf in Germany. It lifted the parts, sent from a steel plant in England,