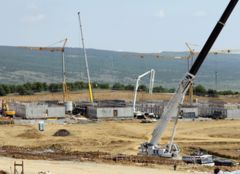 Twelve Potain self erecting tower cranes and Grove all terrain cranes shared the majority of lifting work on a €50 million (US$70 million) redevelopment of a remote military training base in Bulgaria. The cranes had to travel more than 400 km from the Sofia headquarters of Manitowoc dealer Euromarket Group, Bulgaria’s largest supplier of construction equipment. Once at the project, the cranes frequently moved to cover a range of jobs over the base’s 144 square km area.

The Novo Selo Training Range supports on site military activities that include a shooting range for tanks as well as training areas for nuclear, biological and chemical warfare.

The Grove AT cranes: a 55 tonne capacity GMK3055 and a 130 tonne capacity GMK5130-1 made good use of the patented Megatrak suspension system offering more ground clearance than traditional systems, said the manufacturer, allowing easier negotiation of obstacles.

The cranes provided general lift services to construct 75 buildings on the project between early 2010 and March this year. Included in the 75 buildings were 23 barracks, a chapel, post office and fitness centre. Construction also included several administrative, maintenance and medical facilities.

Novo Selo is used by the Bulgarian military and occasionally US troops. Redevelopment of the base is being overseen by the US Army Corps of Engineers. The new buildings will cater for some 2,500 soldiers and should be in operation by 2012.