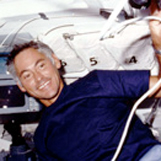 Former NASA astronaut Mike Mullane regaled a crowd of about 860 health and safety professionals at the opening keynote session of the Western Conference on Safety in Vancouver.

Mullane’s “Countdown to Safety” talk drew lessons from his experiences as an astronaut — including losing colleagues in the Challenger disaster — for workplace health and safety.

One of the reasons why the Challenger explosion occurred was because NASA fell victim to a long-term normalization of deviance, said Mullane.

“It’s that natural human tendency in pressure circumstances to want to take shortcuts for best practice standards,” he explained. “There’s all sorts of pressures in the workplace — budget and schedule are huge pressures — and under pressure, people rationalize how it’s OK to shortcut a safety best practice.”

NASA had had other successful missions that used the O-ring — the part on the space shuttle that ultimately failed and led to the Challenger explosion — so it continued to use the part and did not think it would have an issue in the future, even though there were numerous studies and warnings that the O-ring was flawed, said Mullane.

This normalization of deviance occurs every day in organizations as well.

“The immediate outcome is favourable, nothing bad happens, the leader led his team, there were no consequences, that gives the brain false feedback as to rightness of decision to take a shortcut,” said Mullane.

To fight against this, Mullane recommends organizations start by recognizing where the vulnerabilities lie, and taking the time to fix them before they become a problem. All tasks should be approached in this order: safety, quality and then schedule, he said.

Leaders need to ensure their team maintains a best-practice level. They also should periodically re-set the best practices and review past failures to see what lessons can be learned.

Before NASA, Mullane was a flight test weapon system operator. One day, Mullane and a pilot were conducting weapons testing in a F-111 fighter bomber when they reached a pre-calculated low-fuel point that indicates they are supposed to fly home. They had just one more data point to collect and the pilot decided to keep going — and Mullane did not speak up.

“What was going on in my brain? It was a sense that I didn’t count, by virtue of position and longevity. I was the Goose, I had 30 minutes of flying time in the plane, he was the aircraft commander, he had hundreds of hours of flying time in the plane, so my concern of what he was doing was tempered by ‘He has to know better than me,’” said Mullane.

But the plane ended up crashing and Mullane and the pilot were almost killed.

Organizations need to let all workers at all levels know that they’re voice counts. If they see something unsafe happening — even if it’s by a leader or manager — they need to speak up and take personal responsibility and accountability for safety, said Mullane.

At age 14, Mullane decided he wanted to be an astronaut. He did not have exceptional grades or special connections; he had to work very hard to achieve his dream.

Setting goals takes guts, Mullane said, but it’s important to always be stepping out of your comfort zone. When one safety goal is achieved, set another one, he recommends.

“Celebrate your safety accomplishments, but never say ‘This is game over,'” he said. “Safety isn’t a final destination, it’s a continuous journey.”