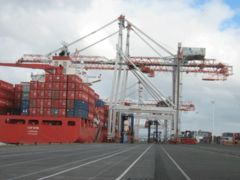 Four Liebherr container cranes already operate at the port, the second and third were post panamax units delivered in 1992. The first was a tango type, delivered in 1978 and the fourth arrived in 2004. Included in the contract is upgrade and refurbishment work on two of these earlier cranes.