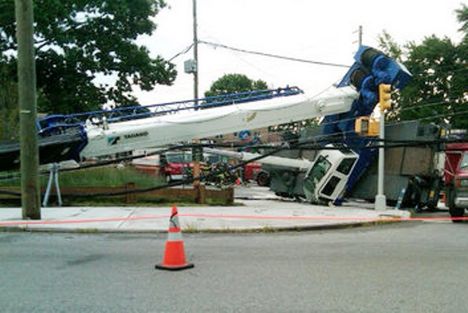 A Rough Terrain crane overturned in Travis on Staten Island New York yesterday, no one was injured and the operator was able to exit the cab and walk from the scene.

The crane a larger Tadano, was working alongside the recently opened Independence Park. It looks as though the crane was operating free on wheels with the superstructure over the side. The boom was telescoped and elevated to an angle of between 50 and 60 degrees. The crane simply appears to have lost stability as the load was extended.

It is sad to see such basic stability related accidents still happening, if this crane was in fact operating free on wheels then some serious questions need to be asked.

While a Rough Terrain crane is perfectly stable on rubber over the side, it is somewhat limited, one thing you don’t do is start telescoping the boom in such a situation. The crane has outriggers that extend as well as go down, they take very little time to set and even if used as stabilisers can avoid the cost and disruption that this incident clearly caused.

This could so easily have caused a tragedy – the operator was very lucky too if the boom had not stopped the crane going further he certainly would not have walked away.

Napoleon Hill is the Real Secret.