The Bloomberg administration is considering letting operators of giant tower cranes get their license without any prior New York City experience — a sensitive topic in a city where cranes have collapsed and dropped loads of steel near busy sidewalks.

A proposed new rule eliminates the requirement that all big crane operators must run cranes as apprentices in the city for three years before getting their license.

But after the Buildings Department regulation was unveiled at a Feb. 13 hearing, a war over safety erupted between the crane workers union and big developers.

Operating Engineers Local 14 warns that crane operators who have never run the giant machines in this city — with its complex infrastructure, extremely tall buildings and busy streets — could endanger city residents.

Big developers, represented by the Real Estate Board of New York, say the change is safe and will make hiring more flexible and less costly.

In the coming weeks, Mayor Bloomberg will have to decide whether the city training requirement is necessary.

The change is a belated response to two separate crane accidents in 2008. One woman on the ground and eight construction workers died in those wrecks.

Mechanical problems and shoddy oversight were blamed, and the owner of one of those cranes is currently on trial facing criminal charges in Manhattan. 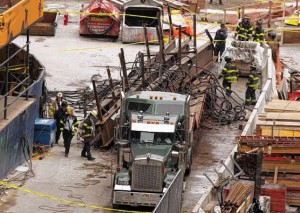 After the 2008 accidents and several others around the nation, the feds decided all cities must now meet national standards.

New York’s rules were fairly stringent, but the feds required re-testing every five years. New York had no such requirement, so the city decided to revamp the whole process.

The proposed new rules require two years of prior apprenticeship experience, but that can take place in any “urban area of comparable density.”

Hank Sheinkopf, a consultant hired by Local 14, said the union’s members are “tested in New York City specific rules and regulations that are much more complicated than elsewhere in the country.”

Salespeople have questions. Jeffrey has answers.