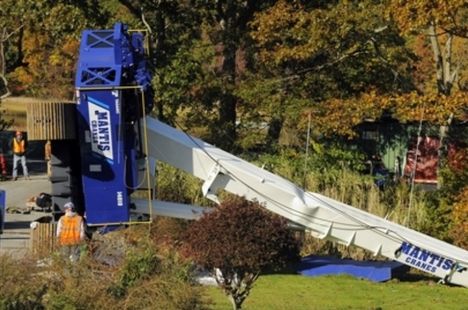 A telescopic crawler crane has tipped over this morning in Connecticut while installing its counterweights.  The crane a brand new Mantis/Tadano -either a 77 or 100 ton capacity unit, was setting up by the side of the road in Niantic, East Lyme and appears to have been lifting one of its slabs of its counterweight prior to installing it when it went over.  A second section of counterweight is just visible behind the crane and it does not look as though the undercarriage was extended to its full width.  The crane’s boom has hit the ground with such an impact that it has buckled the base section. We understand that no one was hurt in the accident.  The crane which is apparently owned by Rhode Island contractor Cardi, was due to go to work on an Amtrak railway project.